IT bills itself as the ‘Rincon Gastronomico’ (gastronomic corner) of the Costa del Sol.

So it is no surprise that you can eat well in Benahavis.

Tucked away in the back streets of the charming town are up to three dozen attractive, atmospheric haunts, the best packed to the rafters at weekends.

Los Abanicos is perhaps the best example. This 30-year established spot can seat 350 people on a Saturday night and will regularly get 150 people.

It is not hard to see why. The attention to detail, professionalism of its waiters and capable team of chefs led by Jesus Casanueva, from Coripe, is second to none.

Inspired by its owner Juan Diaz Rendon, a massive foodie, you can expect to eat some delicious local chestnuts including melt in the mouth rabo de toro and, when in season, an amazing dish of yermas de huevo mushrooms with parmesan.

As eye opening are the wines, which says a lot about the type of clientele who regularly drop into Benahavis centre from its nearby millionaire enclaves.

There are dozens of €100-plus wines, each of which shifts cases each year. The restaurant even manages to sell over 20 bottles of Pingus at €1,400 a throw each year.

The food revolution in Benahavis began at the restaurant called Sarten (meaning frying pan) some four decades ago, sucking people in to eat authentic Andalucian dishes from up along the Costa del Sol.

Its former owner Manolo Espada is luckily still around, although now at a different restaurant La Escalera de Manolo Espada, just around the corner.

Now, very much an institution, it is one of the ‘must visit’ restaurants in Andalucia, with its owner Manolo one of the most likeable restaurateurs.

A born comic and charmer, he is not only extremely knowledgeable about food, he knows how to entertain and welcome his guests. Expect funny stories, bouts on the piano and even magic tricks. And best of all the restaurant is open every day of the year, minus Christmas Eve, for lunch and dinner.

You also might find yourself dining next to Antonio Banderas… or British opera star Russell Watson as was the case this year.

But you are primarily here for the food, which is both excellent and original and includes such gems as a black pudding crepe with onion and egg, which was both crunchy and succulent in equal measures, and a delicious red pepper stuffed with spinach, prawns and salmon and served in a spicy pepper sauce.

For my main I tried his grandmother’s recipe for Iberian pork steak, which includes loads of herbs, sweet pepper and olive oil. It was delicious.

Another place worth trying is the highly-rated La Torre on the charming main square.

A stunning place to eat on a sunny day or warm evening, this place is run by a talented sommelier Diego, from Salamanca, and is highly rated by TripAdvisor.

Look out for the good value five course set lunch, which weighs in at just €28, and includes a good range of dishes, including salmon tartar, lobster soup and a choice of either sea bass or carilleras (pork cheeks).

There is a separate a la carte menu and the restaurant specialises in game in winter and plenty of other seasonal dishes including mushrooms and pickled partridge.

Unsurprisingly it is also a wine drinker’s paradise, thanks to Diego, with over 300 references and some great value chestnuts including Fincas de Ganuza at €30 and one of my personal favourites Contino Reserva at €35. 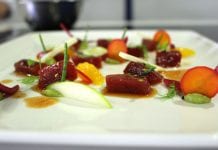