Complaints from 20th Century Fox, Warner Bros, Disney, Universal, Paramount and Sony led to the crackdown on peliculaspepito.com and seriespepito.com, which saw a combined 2.5 million visits per month.

Two men were arrested by police for questioning.

Spain has built a reputation for being lenient on copyright infringement, but tougher lines are set to be taken in the new year. 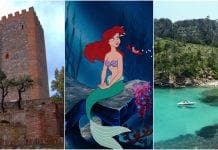 IN PICS: Malaga and Mallorca locations battle to be chosen by Disney for filming of The Little Mermaid live-action remake