HOLLYWOOD big-shot Michael Douglas and ex-wife Diandra Luker have put their 11-bedroom Mallorca mansion up for sale for €50 million.

The former couple have been sharing the property since their divorce in 2000, with the Basic Instinct and Wall Street star and current wife Catherine Zeta-Jones bagging the January-to-June slot.

Although perhaps it’s not that amicable an arrangement. In shades of Douglas’s War of the Roses movie, the furnishings and decorations have had to be changed every time the complex exchanges hands between the Hollywood couple and Luker.

Douglas purchased the luxurious 247-acre S’Estaca property in Valldemossa, on the west coast of Mallorca, in 1989 but it is now on sale through Sotheby’s.

Luker denied rumours that Zeta-Jones had tried to buy her half-share of the estate saying: “Why would someone who doesn’t speak Spanish or the local Mallorcan language or knows nothing about this culture want a house here?

“She doesn’t even come here much.”

Douglas spent more than €6 million buying and refurbishing the Spanish villa and has been paid for promoting the Balearics as a premier tourist destination. 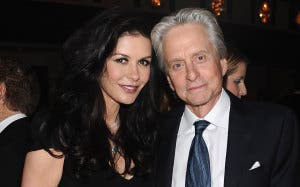