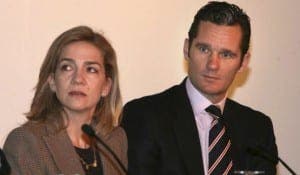 PRINCESS Cristina has been ordered to sell her seven-bedroom mansion in Barcelona to pay a legal bond.

The 1,000 square metre property, which includes extensive gardens, 10 bathrooms, a swimming pool and a lift, has been valued at just under €7 million, significantly less than the princess and her husband paid for it.

The 49-year-old royal faces up to four years in jail after being charged with two counts of being an accessory to tax fraud, along with her husband, former Olympian Inaki Urdangarin, 46.

Urdangarin and his former business partner are accused of siphoning off €6 million of public funds intended for sporting events, and have been charged with embezzlement, tax fraud and influence peddling.

Cristina was a board member for her husband’s non-profit Noos Institute, into which the money was placed.

Purchases for the Barcelona mansion are among the extensive list of abuses of the money, along with salsa dancing classes and luxury holidays.

The Mallorca court leading the investigation ordered properties owned by Urdangarin to be seized in November 2013, to help cover a €6.1 million bond.

The court authorised the sale of the couple’s mansion for €6.95 million, at a loss of at least €1 million on the €8 million-plus they spent buying the property in 2004.

The couple put the house up for sale in 2013 for €9.8 million before it was seized by the court.