IT could have been love or political ambition that led the wife of the mayor of Mijas to make her singer-songwriter debut in a video that has gone viral across the world.

But the video has now received nearly 70,000 hits on YouTube, in just five days.

Sung to the tune of Resistire, a 1987 classic by the Spanish group Duo Dinamico, the song features lyrics such as ‘thank you for those new roundabouts’ as well as praise for lowering taxes.

“As the election campaign is tough and the perception people have of politicians isn’t good, she wanted to encourage and motivate me,” said Nozal.

Armed with just a microphone and a sheet of paper, Van Gaalen went on to highlight why Nozal should be re-elected, in a video that is expected to appear as part of the mayor’s re-election campaign.

“You’ve created an amazing Mijas. You’ve cleaned up beaches, the mountains and the city… I want you as mayor for four more years,” she adds.

Nozal will be running again as mayor in the municipal elections in May.

“Given the success of emerging parties like Podemos, this is the new motto that the Spanish political class must impose on themselves… with no fear of being seen as ridiculous,” said El Mundo. 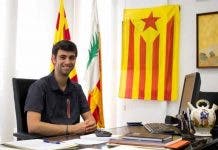