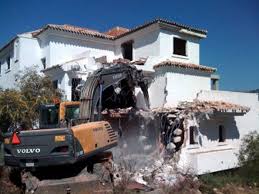 A ROW is brewing between ecologists and expats over illegal housing across Andalucia.

The expats’ association Save Our Home Axarquia (SOHA) has come under attack from a representative of Ecologistas en Accion.

Rafael Yus Ramos, the author of an article which appeared in El Observador, insisted that expats are ‘colonising the rural land and urbanising non-urbanisable land at great economic, social and ecological cost’.

He added that the president of SOHA, Philip Smalley, has threatened the Spanish authorities that if the laws aren’t changed, then they will deliberately ‘catapult’ the municipalities concerned into poverty by returning to their home countries.

“Those within this type of association, of which there are several, assert their right to colonise the rural landscape,” he said.

But local British journalist Lenox Napier insisted: “In all, it’s just policy-mongering from the IU/Los Verdes, who are happy to go after the foreign homeowners (who supply hard-needed wealth and jobs locally), but are completely at ease with other, larger ecological issues in southern Spain.”

According to Ramos, the arrival of some 760,000 British immigrants since 1995 has caused ‘a false climate of prosperity in the municipalities concerned’.

He continues: “They are a small bourgeoisie that has colonised the landscape of the rustic land of numerous Spanish Mediterranean provinces, especially Malaga, Almeria, Alicante and Valencia.”

When contacted by the Olive Press, SOHA refused to make a comment, saying they would not dignify the article with a response.