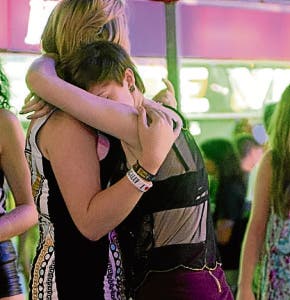 BOOZED-up British teenagers are set for another alcohol-induced summer in Magaluf despite a crackdown on binge-drinking.

The party destination hit new lows last summer when a video showed a British girl perform oral sex on 24 men in return for a cocktail.

And despite new drinking laws, the company behind the infamous event, Carnage Magaluf, is already signing up youngsters on the promise of ‘unlimited free shots’ and ‘£30 booze cruises’.

The events company is even playing on its own infamy, tweeting: “Who’s ready for the world famous bar crawl starting in April.”

It read: “Absolute nonsense about drinking laws in #Magaluf. Clubs still open till 6am, bars open until 4am, some bars open at 6am!”

It also posted a photo girls in bikinis with the caption: “I can’t wait to be ashamed of all the things I do in Magaluf 2015,” adding “Don’t believe the hype, the Magaluf street drinking ban isn’t going to change anything this summer!.”

It comes after Spanish police were given new powers to seize drinks from tourists between 10pm and 8am.

A move to introduce British police in party destinations such as Magaluf and Ibiza was also mooted last month but is yet to be confirmed.