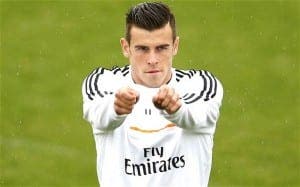 GARETH Bale’s miserable month at Real Madrid got even worse yesterday when a group of irate fan attacked him outside Madrid’s training complex.

As Bale and team-mate Jese left training three men launched a verbal attack on them before kicking and punching the players’ vehicles as they drove away.

Real Madrid have already suspended one club member and identified the two other supporters responsible.

Defender Sergio Ramos was also present at the time and he intervened when Jese’s car was targeted.

“This should not happen,” the Spanish defender said. “These guys were my age. I drove up behind Jese’s car and heard what was said, so I took a stand.

“I stopped the car, rolled down the window and told them they were in the wrong.

“The best thing I did was beeping Jese to drive away. Sometimes the fans wants to express themselves but not in this way.”

The attack came on the same day Marca published another scathing article damning Bale as ‘lazy’ and criticising his transfer fee.

The Spanish paper even went so far as to ignore Bale’s existence in Madrid’s 2-1 defeat to Barcelona by refusing to give him a player rating.

Real Madrid issued a club statement saying they ‘will take any applicable legal action against the individuals responsible for these incidents’.