A PRIEST who allegedly performed 13 exorcisms on an anorexic girl has been arrested. 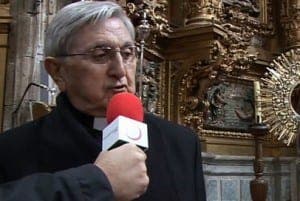 Rituals began in 2012 when Valladolid exorcist, Jesus Hernandez Sahagun, was contacted by the girl’s parents who were convinced she was ‘possessed by the devil’.

Dramatic ceremonies which allegedly involved the girl being tied up with crucifixes placed on her head left the girl injured and, on one occasion, she attempted suicide.

Hernandez, who has performed over 200 exorcisms in the past four years, was defended by the Archbishop of Burgos who insisted the suicide attempt was not connected.

Pope Francis made exorcisms an official Catholic practice in July 2014.