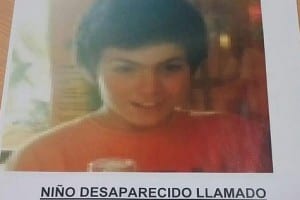 MISSING 13-year-old Cristian has been found after 33 hours of anguish.

A group of three volunteers found him at 4am this morning in a farmhouse in Istan.

Crisitian had disappeared on Sunday evening from his home in Las Vegas del Colmenar to search for his dog who had escaped.

The dog returned home hours later but Cristian did not.

A total of 70 Guardia Civil officers, volunteers and firemen were involved in the search mission.

Cristian is said to be in ‘perfect health’ as there was plenty of food and water in the farmhouse in which he was staying.

The farmhouse had been searched earlier that day but the boy had managed to remain hidden.