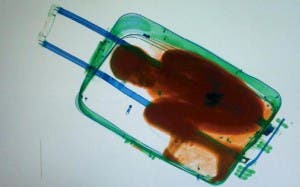 AN eight-year-old Moroccan boy was found stuffed into a suitcase at the Spanish border in Ceuta.

The boy was found in the suitcase of a 19-year-old woman who was searched after acting ‘suspiciously’.

Scans of her bag revealed the shocking discovery to customs officers.

Officers who caught the woman attempting to cross the Spanish/Moroccan border said the boy could have easily suffocated.

“This could have had a tragic end,” a Guardia Civil spokesman said.

The boy, called Abou, poked his head out when officers open the bag.

Police are investigating the incident and the boy’s father has already been arrested.