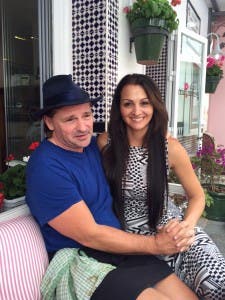 FOODIES in Mijas should be licking their lips with glee. For they finally have a true gourmet talent in their midst.

The Little Geranium in La Cala is not only a stunning spot for outdoor dining, but with chef Steven Saunders, they have a talented former Michelin star chef.

Once starring in TV’s Ready Steady Cook and having written 10 cookbooks, Saunders used to run the highly-rated Pink Geranium, in Cambridge, serving the likes of Lady Diana, Prince Charles and Camilla in his day.

A highly talented chef, the former soil association member was in the vanguard of the organic movement and ran three restaurants in the UK, before moving into Formula One catering.

But now he is back at the sharp end in Mijas, alongside his stunning wife Michele, who is constantly buzzing around in her role as maitre’d.

Choosing Spain due to their love of the country (they have travelled widely here and count chefs Ramon Freixa and Anthony Warrell Thompson as friends) they scouted around for months until they found the right spot.

“We did our research and we realised that La Cala was crying out for a top restaurant,” he explains. “And so far things are picking up nicely.”

It is no real surprise his food being both fresh and healthy… and good value too.

While dinner is a more formal affair, at lunch you get a choice of 13 tapas and you pay depending on how many you order with four, for example, costing just 10 euros.

I tried his tempura prawns in a Japanese dip, with coriander and a green salad, as well as an amazing goats cheese salad with walnuts. I was not disappointed.

The portions were generous and the service, while a bit jerky, was not unpleasant or rude.

It has only been open for a few weeks and the pair are still working on their wine list and suppliers.

“Getting good goat has proven tricky and I have been waiting for days now for a beef order from Galicia,” he explains. “But on the whole we are spoilt for choice here in Andalucia for ingredients.”

Either way, the pink, gingham tablecloths create a very new feel for Mijas … and what is blatantly clear is Steven’s passion for food.

A genuine showman, he had me walking away with a smile.