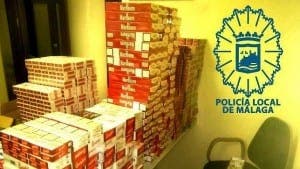 A FORMER police boss has been arrested for smuggling 1,800 illegal packets of cigarettes into Spain.

The ex-chief of La Linea local police was picked up with the contraband, which had a street value of €7,931, stuffed inside suitcases in the boot of his car.

Malaga police had been monitoring the retired officer’s vehicle and made the bust after he picked up the load from a garage in La Linea.

The policeman, who previously worked for the Guardia Civil, admitted he didn’t have the necessary paperwork to prove they were legal.

He put his lawbreaking down to ‘financial problems’.