HE may be dubbed the next Gareth Bale but Jack Grealish’s antics in Marbella are proving more Gazza-esque. 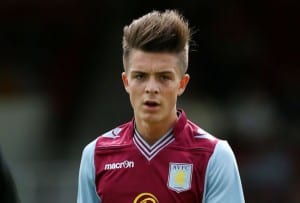 The Aston Villa sensation was snapped in luxury botique hotel Sisu with a €1,400 six-litre bottle of vodka under his arm.

Surrounded by scantily-clad women, the teenager barely moved from his lounger as he knocked back the giant bottle of Ciroc.

“He was swigging from the bottle with his friends and appeared to be drunk,” a holidaymaker at the hotel said.

“It was the middle of the afternoon, the hottest time of day, so he was starting on the hard stuff pretty early.”

Tipped for an England call up in the coming months, the 19-year-old winger appears to be taking inspiration from the class of ‘96 with parallels to Paul Gascoigne’s infamous ‘dentist’s chair’.

Villa representatives have already had ‘a serious word’ with their boy wonder after photos emerged of him passed out in a street while holidaying in Tenerife in early June.