IT seems that Barcelona’s Ada Colau has another job to add to her to-do list as newly elected mayor – repairing the city’s broken lifts. 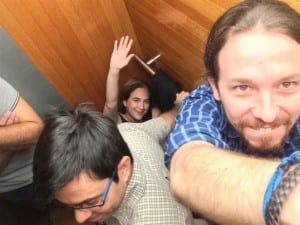 The mayor was trapped inside a lift in a city hall on Friday morning along with Podemos leader Pablo Iglesias and several other leftist party members.

Despite temperatures rising, Iglesias saw the funny side of the story and tweeted a selfie of him and the mayor from his mobile.

The selfie quickly spread on social media which lead to many Spaniards commenting on the good sense of humour that the politician showed.

Iglesias later sent out another tweet saying that the group had been rescued.

Explainer: How much is Spain’s prime minister paid, and how does it compare to other politicians’ pay?