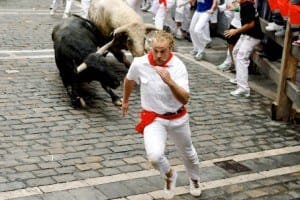 SOME people are crazy and some people go bull running. Maybe there is no difference.

Think about it, what kind of person thinks up the idea of being chased by an incensed beast as something fun to do every year?

And that is what Pamplona does with the annual San Fermin festival. While the bull running culture is upheld in many parts of Spain, this Basque city captures the world’s attention. Up to a million people flock to the small municipal to celebrate a festival that was made famous by Ernest Heminway’s novel The Sun Also Rises.

I caught the last two days of the festival, 13 and 14 July. I arrived in Pamplona late on Monday afternoon and then I missed the bull running that took place at about 6/7am on Tuesday morning. In no way was I going to take part in the chase, but I was intending to watch the spectacle. Alas! The festivities of Monday night took it’s toll on me on Tuesday morning.

To be honest, I was apprehensive watching the bull running part of San Fermin. I saw clips of it on YouTube and I found it difficult to watch. There really isn’t much enjoyment when watching someone fall over and potentially getting seriously hurt.

Yet many run and come away with a scratch or a bandaged leg. Why do they run? It seems to be the rush. Just read this quote from The survivor’s guide to bull running:

What you need to know about after the running of the bulls:

(9) You have been a part of something remarkable. It is hard for the brain to process that. You will become – in this order – speechless, repetitively boring, drunk (this is necessary, otherwise the adrenaline makes you ill), overly affectionate to people including bemused waiters, and finally,wild in your exaggerations. We’ve all been there. No need to blush the next day, but tone it down a bit if you can.

(10) As a result of the above, you might like to come back. Do. It gets better. And you don’t have to run the bulls every time by the way, but it’s certainly better than espresso.

Many disagree with bull running and bull fighting, protesting against how these magnificent beasts are treated. I agree, yet I don’t agree enough to demand a stop to this element of Spanish culture. Perhaps in time I will say this must stop, perhaps when I actually do see a bull run.

Despite all of the above, I enjoyed the party of San Fermin in Pamplona. It had a great Mardi Gras type atmosphere. There was lots of merriment, brass bands and many out-going, albeit inebriated, people.

During my festivities I became acquainted with a group of French and Basque and enjoyed their company while we strolled around the city taking in the festival. Until I lost them after the ‘Pobre de Mi’. We were walking through the packed singing mob that was belting out Pobre de Mi, the ceremonial song that ends the festival. But after I reached the other side of the crowd, my chums were gone, nowhere to be seen. Poor me!

Six injured in Running of the Bulls in Spain’s Pamplona