A MANHUNT has been launched for two British men wanted in connection to the death of a 46-year-old German in La Cala de Mijas.

He died after suffering two blows to the head and collapsing at Captain’s Bar on Wednesday night.

The two British men are believed to have become involved in a row with the victim, after sitting down at an adjacent table.

Witnesses claim one of the Brits then hit the German twice in the head, causing him to fall down.

The men then reportedly attempted to revive their victim, before panicking and fleeing the scene in a British-registered vehicle.

Emergency services were called at 00:40 to reports that a man had collapsed. 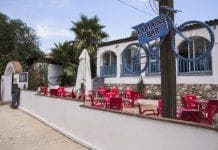