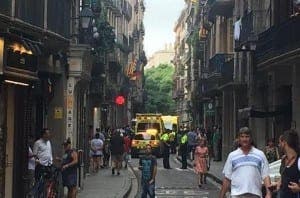 A BRITISH man and a Belgian man were targeted by at least one gunman in Barcelona.

The Belgian remains in hospital after being shot in the stomach outside the Silken hotel on tourist street La Rambla.

While the British man suffered injuries to his arms and torso after running through a glass door.

It is unclear if one or two gunmen were involved.

Earlier reports in the Spanish press stated that two gunmen were involved, with police shooting one of them in the afternoon – this however has not been confirmed.

A manhunt was launched after shots were fired at guests staying at the Silken Hotel.

Those injured were largely treated at the scene, although the Belgian victim has been left in a critical condition.

The reason for the shooting is currently unknown as is the identities of the gunmen.