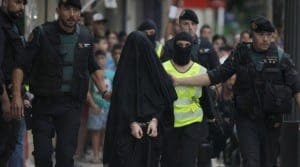 AN 18-year-old Moroccan girl suspected of recruiting for ISIS in Spain has been arrested near Valencia.

She is thought to have been recruiting women online to join the terrorist group.

The girl is believed to have been living in Spain for some time and planning to move to Syria.

Police and counter-terrorist units took her away in handcuffs through the streets of Gandia.

A police statement said: “She spread jihadist ideology on the internet, justifying terrorist acts and spreading videos that glorified executions of people.”

Boxes were also removed from the girl’s flat.

The arrest is the latest in a number of raids by Spanish police targeting ISIS suspects.

Over 100 Spanish people are thought to have left the country to join ISIS.