I’VE walked through the Landport tunnel into Casemates Square a thousand times, and it’s always special… but I’ve never emerged to see a shaven-headed beauty queen throwing an inflatable monkey into a sea of red and white before.

A heady atmosphere – somewhat akin to a weekend in Pamplona, particularly with everyone in red and white – there was the most incredible sense of belonging.

Nobody, literally nobody, had failed to make an effort. Red and white wigs, multi-coloured mohicans, brightly painted ‘madge-mobiles’, this was a celebration of unity, like almost nowhere else on Earth.

And all of this, under a giant poster of HM the Queen.

To get a better perspective I took a climb to the top floor of the ICC car park, where I met a small group of locals who were joining in the singing with gusto.

They had been parked up for hours, watching the preparations unfold, and regaled me with stories about legendary National Days gone by.

All of them to a man dyed-in-the-wool patriots, one couldn’t have hoped for a better introduction to what it means to be a ‘Llanito’.

And finally, when the true anthem of Gibraltar boomed out, after the speeches, I was blown away by the clear emotion emanating from them and the crowd far down below. 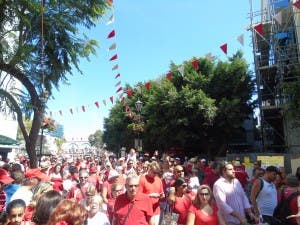 me where I was born), as it is known, held special significance this year, as it marked the 75th anniversary of the massive Second World War evacuation from the Rock.

There was only so much watching I could do though, and after the thousands of obligatory balloons had soared high into the bright, blue sky, I ventured down to join the party… and what a party it was.

Glastonbury had just landed on the Rock, with everyone from toddlersto wheelchair-bound pensioners dressed up and in party mode.

Main Street was decked out like a village fete, with red and white bunting dangling from the windows and locals stopping to chat to each other every two steps. 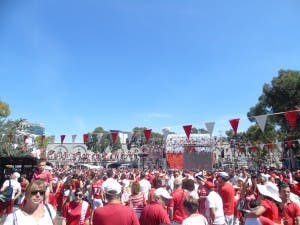 The pubs were packed to the rafters, while the bars in Ocean Village were pumping out the hits to bouncing dancefloors at 4pm in the AFTERNOON.

And it didn’t slow down, as revelers drifted from one place to the next, eventually winding up in Casemates Square where reggae star Maxi Priest rounded off a spectacular day with a superb set.

My memory is a little bit hazy from that point onwards, but it must have been a good night because I’m already looking forward to next year.

I’m not Gibraltarian, but on National Day, wearing my red shorts and white t-shirt, I felt completely at home.

John Culatto - 5 Oct, 2022 @ 17:01
HEALTH bosses in Gibraltar have kicked off a campaign to collect unused medicines from former patients to help save cash and prevent poisoning. The Gibraltar...