IF you’re wandering through Casemates Square this Saturday evening and you see an RAF Hawk zoom above you, don’t fear. 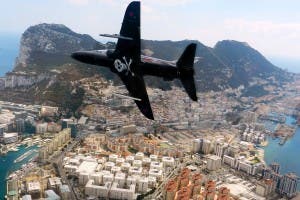 There are two planned flyovers to commemorate the 75th anniversary of the Battle of Britain.

The first Hawk will fly over RAF Gibraltar at 7:30pm, while the second Hawk – both from 100 Squadron – will provide the backdrop to a formal dinner evening at the base.

The Battle of Britain was an aerial bombing campaign carried out by the German Air Force during the Second World War, in 1940.