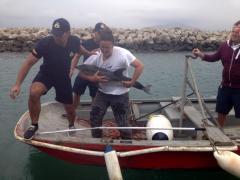 A TWO-WEEK-OLD striped dolphin separated from its mother has been rescued off the Gibraltar coast.

The calf was spotted floundering in shallow waters near Marina Bay by a Waterport Terraces resident and taken back to sea by rescue services.

But the distressed dolphin returned shortly afterwards and was grounded on Western Beach.

Concerned passers-by attended to the baby mammal and contacted the rescue service (ERPU) once more.

Fortunately, a pod of striped dolphins was located in the bay and the calf was released among the group.

It has not been seen since but ERPU is continuing to monitor the area.