A LOVINGLY restored five-bedroom house, walking distance from an award-winning hotel and restaurant and commutable from Gibraltar, has just come on the market. 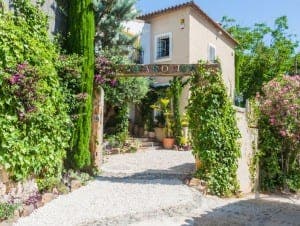 Casa Rio Vista is located in the village of Estacion de Benaojan, near Ronda, and is a mere three-minute walk from the station and sits in breathtaking mountain scenery.

The line is part of the famous ‘Mr Henderson’s Railway’ engineered and built by the British in the 19th century.

Running from Algeciras to Bobadilla, which is often described as the ‘Clapham Junction’ of Andalucia, from here connections can be made to almost any city in Spain via the AVE.

The British-owned house is only 400 metres from Andalucia’s top hotel according to Trip Advisor, Molino del Santo, an extremely popular British-run, hotel and restaurant, which has treated locals and discerning foodies from the coast and Gibraltar for nearly three decades.

When the owner discovered the ruin, which had been abandoned for decades, the roof had collapsed and the residents were basically a herd of goats.

But he fell in love with its charm and location and using highly-skilled local craftsmen he has managed to reinstate the property and grounds.

Reclaimed doors from a convent were hung and architectural fittings and stairs purchased from dealers throughout Andalucia.

The grounds were landscaped and planted to form a verdant enclave in the elevated position above the fast-moving Guadiaro River, which teems with fish and attracts wildlife. A popular walk – one of Andalucia’s best, according to writer Guy Hunter Watts – runs practically from the door down the river to Jimera de Libar.

As well as local craftsmen the owner was keen to use local materials. The next pueblo along, Cortes, has a small ceramic studio run by a Spanish artisan and located next to alluvial strata of clay.

The artisan collects the clay from the river bank, crushes it and makes both ceramic and terracotta tiles to her clients’ designs and specifications.

The house was slowly and lovingly restored over the course of a decade and almost became a work of art in itself, as it was reconstructed in the classic ‘estilo Andaluz’.

The result is breathtaking with the five bedrooms all en-suite, a large kitchen/diner, a winter lounge with fireplace and office space on top.

A beautiful summer lounge opens onto a shaded terrace and the sound of a goldfish pond’s tinkling fountain.

The property is furnished with a wonderful collection of antiques and an imaginative collection of Andalucian and modern art, as well as Roman antiquities.

There is very much a feel of Al-Andalus to the house, with Arabic-styled arches, as well as exposed oak and pine beams geometrically set above an amazing elliptical staircase.

In an alcove within the garden is a rock pool that is fed from a mountain stream via an aqueduct.

For an evening meal, apart from the Molino, there is, within the village, Asador Muelle and Bar Stop. It provides a three-course lunch for just €8. ‘The proof of the pudding is in the eating’, as they say, and the place is usually packed!

And a small gem in the village is the store that stocks all essentials.

Ronda is a 10-minute drive away and, if you want the buzz and action of the coast, that’s just 45 minutes, while it is more than commutable to Gibraltar by train, via San Roque station.

But then again, you might end up moving here and fall in love with its peace and quiet and never leave again.

Price on application via estate agent Castles in Manilva www.castlesestateagency.com