A LANDMARK victory for five British expat families could spark a spate of compensation claims in Spain. 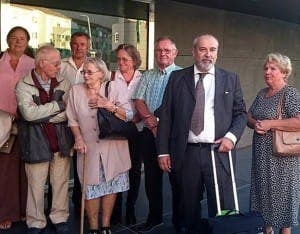 The ruling to cancel the demolition of five English pensioners’ homes in Almeria saw a newly-implemented property law put into action for the first time.

There is now renewed optimism for expat homeowners who fell foul of illegal housing scams in the mid 2000s.

“It certainly looks promising,” she told The Olive Press.

“We feel that the change to the Criminal Code has given the courts the tools to deal fairly with homeowners who were the victims of unscrupulous promoters and careless administrations.

She added: “The new legislation exists but people need to invoke it.

“The five homeowners are now free from proceedings, relieved of the stress, and can set about having their properties regularised.”

Meanwhile, a spokesman for fellow campaign group SOHA said the victory was a ‘positive sign of things to come’.

He also said the group is hopeful for a positive resolution to the Prior’s case, which saw the expat couple’s Almeria home torn down in 2008 after it was deemed illegal, as reported in The Olive Press.

WATCH: Tenerife motorist spotted driving with child in the boot