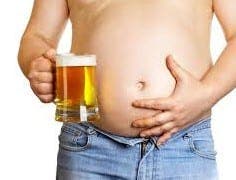 A BEER a day won’t make you fat, a Spanish study has revealed.

The Spanish Academy of Nutrition (AEN) has debunked the beer belly myth by confirming a caña (200ml) contains just 84 calories.

This intake represents just 3.4% of a man’s daily recommended intake and 4.2% of the female calorie allowance.

In actual fact, AEN president Lluis Serra Majem confirmed that people who drink a small beer regularly tend to have a healthier BMI than those who don’t.

Tubby kids: Four out of ten children in Spain are overweight