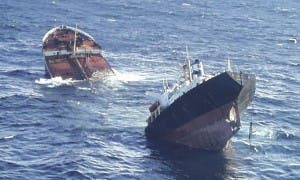 THE men behind the ‘worst environmental disaster’ in Europe have been acquitted of negligence.

The decision to acquit three Greek sailors over the 2002 Prestige tanker spill has been met with widespread criticism.

He is also demanding they pay €4.3 billion for the environmental damage caused by the spill.

The crew are accused of acting negligently, resulting in 75 million litres of oil being released into the sea.

The spill took place after a storm off the coast of Galicia resulted in one of the ship’s 12 oil containers splitting.

After being denied access into French and Spanish ports – due to the spill – the ship eventually split in half and sank after six days, resulting in the ecological disaster.

The Supreme Court will now take one month to decide whether or not to prosecute Captain Apostolos Mangouras, 80, and his two lieutenants.

Take a peek at Celtic Spain