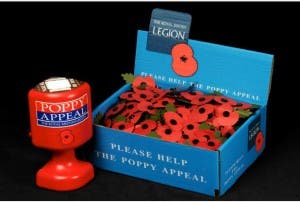 IT is a time of year when big-hearted expats rally around raising money for one of the world’s most worthy causes.

A time to remember the millions who fell during two world wars, many of us will be wearing a poppy on our lapels to honour and support retired and injured personnel.

But this year, be extremely careful before putting your euro into the collection tin.

For, in a ‘deplorable’ state of affairs, an incredible 9,000 poppies and dozens of blue collection tins are believed to have been stolen from a storeroom on the Costa del Sol.

The Olive Press can reveal that the entire stock of poppies for the Estepona and Manilva areas was ransacked in March, along with a sentimental coffin-sized Union Jack flag for funerals.

Now the British Legion is warning expats and tourists alike to be ‘extremely wary’ of poppy boxes.

Insisting that any poppies sold in the Western Costa del Sol will most likely be ‘illegal’, the Estepona branch is now trying to solve the mystery.

Chairman Keith Ranshaw, 67, told the Olive Press: “I want to warn people that any poppy appeal boxes found west of Estepona this year are illegal.

“We don’t know for certain if the boxes were actually stolen, but I don’t understand how anyone could see them and not know what they are.

“It’s exasperating to think somebody could just dump them, or worse, try to con people with them,” added the former RAF pilot.

Earlier this year, Ranshaw, who has owned an apartment in Duquesa for nine years, discovered the locks on the storage room had been changed after a bank repossession of the next door apartment.

When Ranshaw filed a report with the local police, he was told that there was ‘nothing they could do’ as there was no proof of a theft.

When they eventually gained access to the locker, it was empty of all poppies and boxes, along with a flag and all the branch’s paperwork and AGM minutes.

“I will be letting expats know to be on the lookout for this potential fraud occurring over the next few weeks when poppies would normally be almost everywhere,” he told the Olive Press.

Meanwhile, the Estepona Branch has been forced to close, due to a lack of volunteers. It means the only official places to buy poppies in Estepona will be at the International Citizens Centre and the Wheel House.

The owner of Fathoms Bar in Sabinillas, Tony Fathoms, has ordered a poppy box directly from the Legion’s central base in Coin, as has nearby Itzabar.