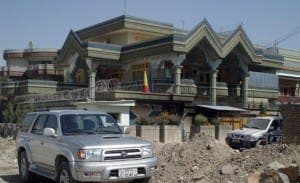 THE Taliban has claimed responsibility for car bombing the Spanish embassy in Kabul, Afghanistan.

Two people have reportedly been killed while a further seven have been injured.

Fighting continues at the scene where three men are reportedly locked in a gunfight with police.

Another man is believed to have blown himself up in the car outside the embassy.

The terrorist organisation has said it launched the attack on a Spanish embassy guest house, in its quest to rid the capital of ‘invaders’.

“We are under pressure, but we are OK,” he said. “The situation is still going.”