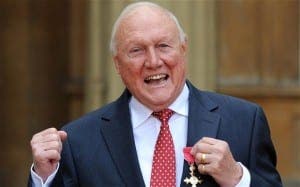 CONVICTED paedophile Stuart Hall is eyeing up a move to the Costa del Sol after being freed from prison in the UK.

Disgraced broadcaster Hall’s wife Hazel has reportedly been viewing property in Marbella and Puerto Banus while the former 5 Live presenter was behind bars.

Hall however will not moving over to Spain anytime soon after he was banned from travelling abroad for two years.

The 85-year-old who served two and a half years of a five year sentence, regularly holidayed on the Costa del Sol throughout the nineties and see Spain as ‘the perfect escape’.

A neighbour of the couple said: “They both love Marbella and Puerto Banus. Hazel just wants them to see out their remaining years peacefully, away from the spotlight.

“Whether she goes before Stuart can join her is up in the air at the moment.”