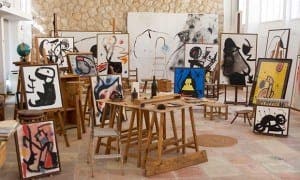 From 1956 until his death in 1983, Miró worked in the purpose-designed space on the Balearic island after moving from Paris.

Random objects scattered across his canvasses included a tennis cap, an empty bottle of Cava, matchboxes, copies of the local newspaper and a mummified cat.

Miró, who died at the age of 90, worked in ‘a very chaotic place where every single thing had to be in the right place’, said grandson Joan Punyet Miró.

The exhibition runs from January 21 to February 12 at the gallery Bowman Sculpture.

George Mathias - 22 May, 2022 @ 12:00
VICTORIA Wright and her friendly team have been advising clients on the Costa Blanca for over 20 years. They have recently expanded into new premises...