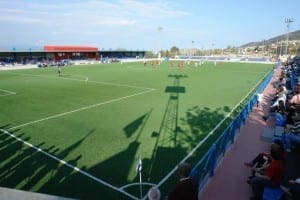 A SPANISH footballer is fighting for his life after being stabbed by opposition fans.

Playing for Alhaurin de la Torre’s B team, Samuel was rushed to hospital after he was stabbed in the chest by fans from El Palo’s B team.

Undergoing emergency surgery at Malaga’s Carlos Haya hospital, 24-year-old Samuel is said to be in a ‘stable but serious condition’.

The young footballer was set upon by a group of 10 fans after he had an on-field scuffle with a member of El Palo’s side.

The men jumped the advertising hoardings before setting upon Samuel and stabbing him in the chest.

Staff managed to get Samuel into the changing room where he collapsed from his injuries.

Police have identified the attacker.