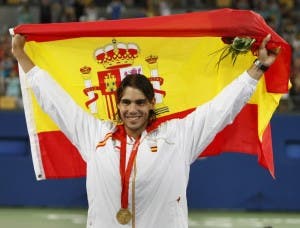 RAFAEL Nadal has said he would love to carry the flag for Spain at this summer’s Rio Olympics, adding that World No.1 Novak Djokovic is the man to beat.

Spain’s Olympic committee president Alejandro Blanco has given the much-loved tennis star his blessing, but the decision will rest with a group of federation of presidents.

The 14-time Grand Slam champion won gold in the 2008 Beijing games, but wants the chance to medal again after having to pull out of London 2012 due to knee problems.

He said: “It was terrible news when I had to pull out of London. I have missed Grand Slams, Davis Cups in my career but the toughest thing was the 2012 Olympics, so I would love to bring the flag.”

“But there are a lot of other personalities in Spain who can have this privilege too and probably deserve to, so it’s not my choice,” he added, “I hope people are going to make the right decision, it would be a great honour, I hope to be the man but at the end of the day it is an Olympic Games and you are part of the team and it’s something special. If I’m carrying the flag, great, if not then I will be in the back (with the team at the opening ceremony).”

On Djokovic, the superstar reportedly said: “Everybody wants to be in his position now. When you win it’s easier to keep winning and when you lose it’s easier to keep losing. It’s always those same dynamics, especially with an unbelievable player like him. It’s difficult to stop, he’s going to be the favourite for every tournament until somebody shows something different. He’s the player of the moment without a doubt, everyone sees him as a winner.”

The Spaniard will face Britain’s Alijaz Bedene in the second round of the Monte Carlo Masters tomorrow (April 13).