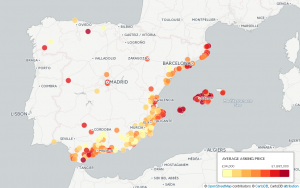 WHETHER you’re after a luxury mansion with a sea view or a mountainside finca on the outskirts of a pueblo blanco, the priciest – and cheapest – parts of Spain have been unveiled.

Using figures from at least 1,000 properties in over 100 towns and cities across the country, property portal Kyero has created a map of the average asking price.

Largely focusing on coastal resorts and expat hotspots, the map shows that the average price of Spanish property ranges from €50,000 to over a million.

And contrary to popular belief, there are still expensive enclaves in Spain. Some areas on the islands of Mallorca and Ibiza see average asking prices of more than €1 million. And in parts of Marbella, average prices are over €800,000.

Elsewhere along the Costa del Sol, there are bargains: in Estepona the average house costs a more affordable €400,000, while a place in Sabinillas can be snapped up for the modest average cost of €160,000.

The cheapest town mapped is Martos in Jaen, known for its olive oil production. The average  price for Martos properties is just €41,000.