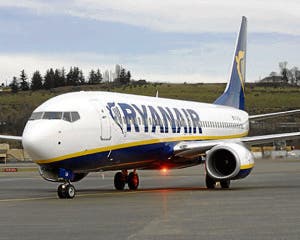 SEVERAL drunken Brits have been chucked off an Alicante-bound flight today after behaving ‘dangerously’ on board.

The pilot was forced to divert the flight after the two men, reported to be Liverpool fans, started ‘fighting on board’.

The passengers in question were taken to a police station and will be heard today after an English interpreter has been called in.

Ryanair confirmed that, afterwards, the flight continued to its Spanish destination.