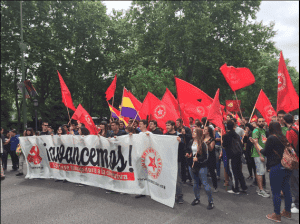 HUNDREDS of thousands of people around the world marched in celebration of International Workers’ Day yesterday.

The day, which celebrates laborers and the working classes, is promoted by the international labor movement, socialists and communists, and occurs on May 1 every year.

Madrid saw union groups and workers shout slogans and wave flags adorning a picture of scissors inside the word ‘NO’ – a call to the government to stop cuts.

They chanted demands for higher wages, better conditions and more job security as, like  many countries, Spain continues to battle economic uncertainty and high unemployment.

Spanish protesters also held banners reading “No one is illegal” and “No to TTIP,” in reaction to the EU’s immigration policy and the controversial transatlantic trade agreement with the US.

In Paris, people were arrested as riot police struggled to control the crowds, who were irate over a potential new bill that would see longer working hours introduced.

Violence also erupted in the Philippines and Turkey’s Istanbul, where one marcher was killed when he was hit by a water canon vehicle.

London saw thousands of protestors joined by Labour leader Jeremy Corbyn, who denounced the advancements of far-right groups across Europe and spoke out against the rise of anti-semitism.