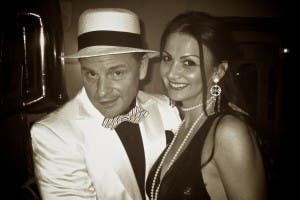 I’VE been cooking for over 40 years so I’ve planned a lot of parties, weddings and special events in my time. One of my most memorable would be the bash I threw for Prince Charles in London, using some of his own Highgrove Lamb.

It was a sophisticated yet casual affair and I used the opportunity to celebrate the lamb farmed on his estate. I have to say it is the best I have ever eaten.

I was aiming to keep it simple with so many people attending but, being a chef, I couldn’t resist using all the cuts laid out before me. I decided on slow roasted shoulder with anchovy and rosemary, pink juicy rack cutlets, harissa-spiced leg, some bbq-ed rump steaks and ribs with honey and pistachio.

When people arrived they all commented on the delicious smells wafting from the kitchen. Most people tried a little of each, which we served with interesting salads: Nicoise with French beans and olives, roasted peppers with fresh white asparagus and wild mushrooms, Greek village salad with barbecued haloumi cheese, Moroccan spiced cous cous, quinoa with mint and chillies,  roasted aubergine caviar and summer leaves loaded with garden herbs.

I whizzed up a variety of sauces and dips as well – salads should be interesting. Instead of a bog-standard  mixed salad, think about deconstructing some of the ingredients and do a fab tomato salad with red onions and balsamic, for example, or a roasted pepper salad. Borrow some of the above ideas and Google others.

However what stuck in most of the guests’ memories, and that of the royal host, was the slow roasted ‘pulled’ lamb with anchovy and rosemary. Prince Charles commented that the anchovy gave the lamb a most interesting saltiness and fabulous flavours.

I thanked him and asked him whether his mother liked it too.

‘My mother?’ he replied quizzingly (as she was not in attendance). ‘Yes,’ I said. ‘I cooked a similar dish for her when we opened The Lowry in Manchester.’ ‘ Good stuff’, he replied. ‘Lets keep it in the family’.

So here below is that royal recipe.

If you are throwing a party, this dish can be cooked the day before and reheated successfully on the barbecue or in the oven which makes it a winner for simplicity as well as magnificent flavours!

Half a tin (120 g) of anchovies, roughly chopped

Approx half a tin (120 g) of tinned anchovies

A bunch of fresh rosemary

1 green chilli, roughly chopped (deseeded if you don’t like it too hot)

Up to one day before the party, tip all the paste ingredients into a small food processor with a splash of water and a pinch of salt. Blitz until fairly smooth. Lightly score the lamb a few times on all sides and rub the paste all over. Push some of the rough chopped anchovy into the scored lamb, throw loads of rosemary over it and drizzle with olive oil. Ideally cover and leave in the fridge for a few hours or overnight.

Heat oven to 160C fan/gas 4. Heat 2 tbsp of the oil in a roasting tin that is big enough to fit the lamb snugly. Add the onions, cinnamon, cardamom and bay leaves to the hot oil and cook for 10 minutes to colour and seal.

Sprinkle over the sugar and the vinegar and season with Maldon salt. Cover the pan with foil and place in the oven for three hours until the lamb is really tender. Leave to rest for 15 minutes.

Heat the barbecue on full (or your oven, 200C fan/gas 6). Place the lamb in a shallow roasting tin if in the oven, brush with oil and roast for 40 mins until nicely browned. When cooked, make a sauce with the lamb juices in the roasting pan,by adding  rosemary, red wine and melted redcurrant jelly, finished with fresh mint leaves.  Pull the lamb off the bone with two forks and serve on a board, using the coriander, mint and rosemary sprigs to garnish.  Serve with the sauce and some coliourful salads.