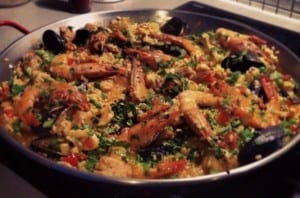 MOST people think that paella is a Spanish national dish but many foodie Spaniards disagree.

This is mainly because paella originates from Valencia, and in just two guises: the Valencian paella with meat or with seafood.

It was never intended to be regionalised.

Paella is thought to have originated in the 10th century when the Moors first began rice cultivation.

Rice became a staple food, and cooks and chefs often combined it with meat or with fish, but never both.

In the 19th century the ingredients of paella changed, to include rabbit, chicken, duck and even snails.

That doesn’t sound anything like the paella we have had in the little Spanish restaurants on the Costa del Sol, does it?

Paella is like a lot of classic recipes which are often adulterated as years go on for simplicity, speed and budget.

How the beautiful and original Valencian paella can end up with rice coloured yellow with food colouring, frozen peas and sausage, is beyond me!

I’m a real foodie and I love original recipes to be kept to their original format except maybe sometimes when there is a need to modernise bits, especially where presentation is concerned because things evolve.

If you love paella, and want to enjoy the original thing, then do try this authentic recipe. I would love to have some feedback on it. Email me anytime.

First and foremost you will need a special paella pan called a paellera or just a paella. The special pan is essential!

1/2 rabbit, cleaned and cut into 4 pieces

Heat a paella pan over medium-high heat, and coat with the olive oil. Add the chicken, rabbit and garlic; cook and stir until nicely browned. Move the browned meat to the sides of the pan, and add the tomato, butter beans, and the sliced green beans. Season with paprika, and mix well.

Fill the paella pan almost to the top with water. This is to help you to determine how much rice to add. Bring to a boil. Simmer for about 1 hour to make a nice broth.

Season with a generous amount of salt, and just enough saffron to make a nice yellow colour. Season with the thyme and rosemary. The secret  is to make a rich tasting broth that will soak into the rice to make it delicious. Stir in half as much rice as the amount of water in the pan. Cover, reduce heat to low, and simmer until all of the liquid has been absorbed (about 20 minutes). Allow to rest for 10 minutes and serve.