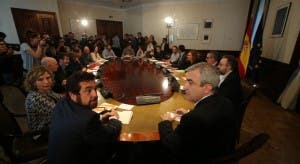 SPAIN’S political parties have ruled out last-minute talks to form a government, making a fresh election in June almost inevitable.

King Felipe VI is set to meet the parties next week in a last-ditch attempt to strike a deal, but acting Prime Minister Mariano Rajoy said he will tell the king he failed to garner enough support to form a government.

Rajoy blamed the leader of the Socialist party Pedro Sanchez for the deadlock: “Pedro Sanchez can avert the elections. I call on him once more to work on a grand coalition government that would bring stability to Spain,” he tweeted.

But leaders in the Socialist party say Rajoy knows a coalition is not possible.

Senior member Antonio Hernando said: “Rajoy knows it from day one, we ran in the elections to make sure he would no longer be prime minister.”

He also blasted anti-austerity Podemos for turning down a three-way coalition with the Socialists and Ciudadanos.

But almost 90% of Podemos members voted against such a coalition, while the leftist party hinted it would run on a joint platform with a former communist movement if a new vote is called.

Elsewhere, Ciudadanos leader Albert Rivera’s called for Rajoy and Sanchez to step back and allow a transition government lead by an independent figure to be voted in.

He said: “We should assume that we have failed and we should work on a consensus government that could make reforms.”