A SUPERMARKET in the Campo de Gibraltar has burnt to the ground after a vicious fire saw the surrounding area engulfed in thick black smoke. 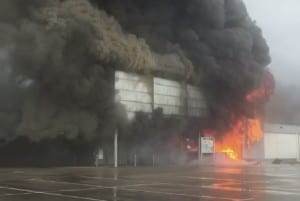 It took several hours for the team of firemen and ten fire engines to extinguish the fire at Lidl in Palmones after around 20 residents called the police at 5pm on Sunday May 8.

No-one was injured in the fire which reportedly started in the shopping trolley area outside the store.