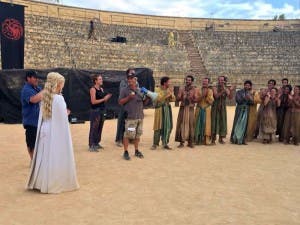 THE cast and crew of addictive HBO series Game of Thrones are back in Andalucia.

The hillside village of Osuna in Sevilla is once again playing host to the blockbuster fantasy drama for its sixth season of filming.

While Osuna Museum has recently launched a permanent exhibition about the series, many of the town’s residents have served as extras.

The bullring was also used as the main fighting pit of a key location in the last series, the fiction city of ‘Meereen’.