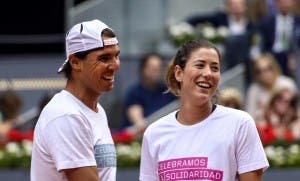 SPAIN’S Rafael Nadal and Garbine Muguruza could play in the mixed doubles at Rio, it has been announced.

Garbine is fresh off her upset victory over Serena Williams at the French Open final, while Nadal is resting up after his wrist injury.

He will have to sit out of Wimbledon but will be in fighting form for the Olympic games, Spanish tennis authorities have said.