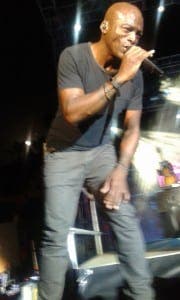 SEAL has dedicated one of his hits to tennis ace Novak Djokovic.

The UK solo star dedicated Kiss for a Rose to the world Number One at a packed concert in Marbella.

The Serbian beamed back as the British star serenaded him with the Jamaican Patois ‘wagwan’.

The British star struck up a friendship with Djokovic, while on a whistlestop trip to the Costa del Sol.

As well as hanging out on the tennis court at Hotel Puente Romano, Seal confessed he wanted to introduce his kids to Djokovic, who has been a frequent visitor to Marbella this year.

Only last month, the Grand Slam winner warmed up for Wimbledon on Puente Romano’s courts.

One lucky Marbella lad also enjoyed an afternoon to remember when Djokovic ‘randomly’ picked him for a knock around.

Posting the photo on Twitter, the Serbian said ‘It only takes two for tennis so when I need a hitting partner any boy or a girl watching could join me’.

Thousands watched soul star Seal belt out hits including Crazy and Fly Like an Eagle at the show at the top Marbella hotel.

They included Olive Press competition winner Beverley Stonehewer who ‘had an amazing time’.

“Thank you for the tickets. The concert was fantastic,” she said.

Seal had a great chemistry with the audience, cracking jokes and even venturing into the crowd to sing with fans.