The Lincoln ace and his team-mates won worldwide praise for their stunning 1-0 victory over the Glasgow giants at Victoria Stadium last week. 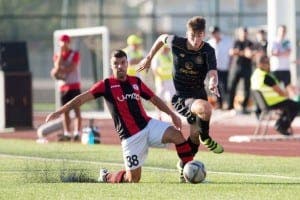 “We’re really happy that the football world is taking notice of us,” Walker told the Olive Press.

“We are starting to put ourselves in the shop window and there is a chance for the Celtic game to be an option for some players to move on.”

Meanwhile, goal-hero Lee Casciaro has swapped shifts with a police colleague so he can fly to Glasgow for the crunch tie.

“When I get back, I’ll cover their shifts. It was the only way,” he told the Olive Press.

“When we have ships or submarines in we are in charge of their security. But that is my duty, football is my passion.”