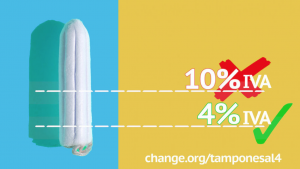 women are threatening to take their hygiene business to Canada.

A group of Spanish women have launched a campaign to protest the ten percent tax on feminine hygiene products.

The Canadian government removed their ‘tampon tax’ last year in response to arguments that feminine hygiene products should be treated like other necessary items like food and water.

The group says that mass orders of tampons from Canada are cheaper than buying them locally from the supermarket.

The campaign’s petition has more than 130,000 signatures.