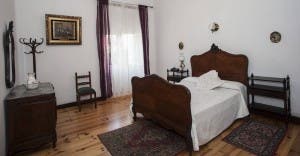 A HOTEL room where General Franco slept the night before launching the Spanish Civil War has become a huge magnet for the pink pound.

It was here that the former dictator slept on the night of July 17, 1936, before British pilot Cecil Bebb flew him to north Africa from where he launched the feted civil war.

He had checked out early on July 18, leaving for the airport at 5.15am.

The room still has the same furniture, and the door’s keyring holds a miniature portrait of the dictator, whose uprising triggered the bloody conflict that cost 500,000 lives.

“If somebody doesn’t like the keyring, we can remove it,” said hotel owner Francisco Yanes.

“We recently had one Italian in that room who had also slept in Mussolini’s old bed.”