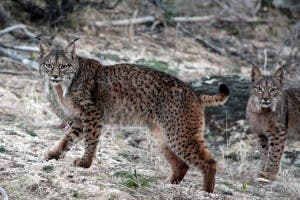 IBERIAN lynx are being re-introduced into Spain’s capital.

Following a successful 15-year breeding programme in Andalucia, the endangered species is set to be introduced into southeastern areas of Madrid around the Cofio and Alberche rivers.

In 2001, the number of lynx in Andalucia had plummeted to under 100. That figure has now tripled.