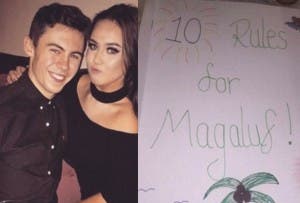 EDINBURGH lass Whitney Travers has sought to avoid the headache of stressing about her boyfriend’s ‘lads holiday’ by providing him with a 10-step rulebook.

The ‘10 Rules for Magaluf’ pamphlet lays out the do’s and dont’s for Edinburgh beau Kieran Lumsden ahead of his holiday to the popular Spanish resort.

Kieran tweeted a picture of the booklet, which has been completed in gel pen, stating: “She’s taken psychoness to a new level.” 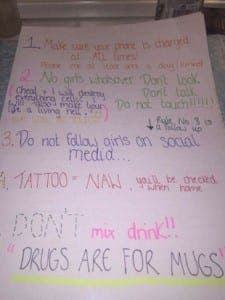 Whitney tells him not to “follow girls on social media,” not to get a tattoo because he’ll “be checked when home”, not to mix drink, and that “drugs are for mugs”.

Other than telling him to ensure his phone is charged so he can call her everyday, the rest of the rules seem to involve avoiding females at all costs.

She writes: “No girls whatsoever. Don’t look. Don’t talk. Do not touch!!!!!! (Cheat and I will destroy everything Celtic, I will also make your life a living hell. Kim will be told too.” 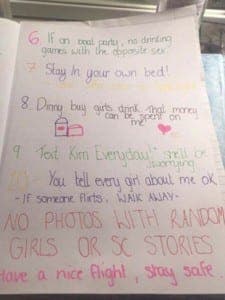 She concludes by telling footie-loving Kieran: “You tell every girl about me, if someone flirts walk away. No photos with random girls.”