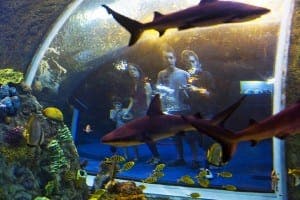 MORE than 250 tropical species have been added to Granada’s new Biodome.

The €12.5 million project in the city’s Science Park gives visitors a taste of tropical rainforests and coral reefs around the world.

Largely funded by the EU, the Biodome is split into three levels: underwater, terrestrial and aerial.

Among the inhabitants are crocodiles, sharks, flying foxes and stingrays.