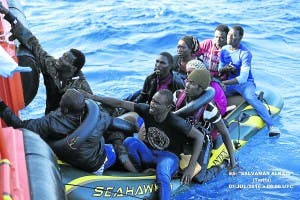 “THEY called me again at 5.30 am. I was the last one to talk to them alive,” Helena Maleno Garzon, a Tangier-based human rights worker for Walking Borders tells the Olive Press.

“They said, ‘Please help, we are having problems with the boat’. The wind was very bad that night. I spoke to Zakarias in French before the phone went dead.”

She sighs: “It’s very painful. Many times I am the last person who talks to them. The families always want to know what their last words were. And their last words are always, ‘Please help. I don’t want to die’.”

The seven African migrants, aged 20 to 25, were all known to Helena. The young men had left Morocco in a boat for Tarifa on August 23. But despite a rescue mission by Spanish and Moroccan coast guards, they weren’t found. Their families now face an agonising wait to see if their bodies will be recovered. 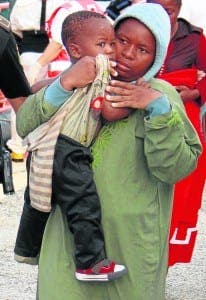 In her 15 years working with migrants crossing to Spain, it’s become a heartwrenchingly familiar tale for Helena. This year alone, 40 have died trying to cross to Tarifa, she tells me.

By contrast, the nine Moroccan migrants who pleaded guilty to entering Gibraltar illegally two weeks ago were some of the lucky ones. At least they were alive.

The men’s crossing from Africa ended when their inflatable boat landed near Catalan Bay two weeks ago. (see pic above)

The men, aged 21 to 35, fled, but were soon arrested by the Royal Gibraltar Police (RGP).
Deportation to Morocco is a certainty. But thousands enticed by Europe’s promise glittering across the blue expanse don’t survive the journey.

“I’ve been a police officer for 20 years and I’ve hardly ever seen it.

“On the rare occasions it happens it is due to engine failure or confusion. We are very close to a major shipping transit route, so the crossing is not very safe. Plus there is another border for them to cross in Gibraltar.

“Not only that, but the waters are very heavily policed to guard against drug trafficking. So your chances of being discovered are much higher.”

Gibraltar may be low on the list of migrant destinations, but the past four years have seen a human exodus of biblical proportions along the Mediterranean.

According to the International Organisation for Migration (IOM), 1.4 million migrants have crossed in that time with 8,100 deaths recorded.

The numbers heading to the Spanish coast are smaller (the tidal wave of refugees fleeing the killing fields of Iraq, Syria and Libya don’t cross from Morocco.) and are mainly west Africans.

According to the IOM, so far this year, 2,476 migrants have landed in Spain, with 53 recorded deaths (human rights group Associacion Pro Derechos Humanos Andalucia put the number of deaths at 208). The IOM estimates hundreds have died since 2012.

Behind every one of these statistics is a story of hardship and suffering. Amadou Siribe, a 19-year-old from Mali, fled his poverty-stricken Bamako home in search of a better life.
He told the Olive Press how he and four friends almost died crossing to Spain in a blow-up dinghy.

“The water was very rough and dangerous,” he said. “One of us was bailing out because so much water was coming in.

“Dolphins were leaping out of the water and almost sinking the boat. I fell in the sea twice and had to be rescued. I swallowed so much salt water I became very sick. After six hours

I thought we were all going to die and began crying for my family.”
Hope, a young Nigerian woman, told the Olive Press how she survived a two-year ordeal after being trafficked to Spain by gangs.

“I saw people dying on the spot from disease and from scorpion bites,” says Hope of her journey through Libya to Morocco.

“We were piled on top of each other in an open truck in the desert. We ran out of water in the desert and had to drink our own urine.”

Hope eventually made the crossing to Spain in a ramshackle boat while pregnant along with 54 other desperate migrants.

Fortunately, Tarifa’s Cruz Roja scooped both her and Amadou from the sea. They are now assimilated into La Linea life (Amadou plays football for Real Balompédica Linense, Hope has two children and helps out at Hogar Betania, the crisis centre that helped her when she first arrived).

But others, like the men Helena knew, are not so lucky.

“The situation is a tragedy,” she says. “When the migrants are in the sea they usually call us between Morocco and Tarifa. If they’re crossing somewhere else, the phones don’t work.

“We have cases of people rescued off the Andalucian coast. Sometimes the ship might have been lost at sea for 10 or 11 days, people die and sometimes a person drinks piss to survive.

“When that person is rescued they are arrested by the Spanish police. Nobody is considering that person spent 10 days in the sea.

“They need help. Like the victim of trauma or a tragedy.”

This is the hidden face of pretty whitewashed ports like Tarifa, the frontline in the battle to keep the Campo de Gibraltar’s waters safe. Young kitesurfers, lured by the Mediterranean’s whipping waves, have made this one of the coast’s hippest destinations.

But mainland Europe’s most southern point is also a magnet for Africa’s migrants and refugees. The Salvamento Marítimo’s 100-strong team patrols the waters 24/7 off Cadiz, with Tarifa the main focus of their attention.

“The majority are in a state of shock when we find them,” Salvamento Marítimo captain Jose Cristobal Romero told the Olive Press.

“The cold is one of the problems they have to face. Tiredness is a key factor because they try to row for a long time in boats that are not adequate.”

According to figures supplied by Salvamento Marítimo, 1,219 migrants have been rescued at sea and taken to the sanctuary of the pretty whitewashed port so far in 2016.

If they make it, migrants are taken to a detention centre on Tarifa’s Isla de las Palomas (around 90% are put out on the street after 60 days).

Campaigners APDHA have called for the centre – or CIE – to be closed, saying it is illegal to hold people there.

But still the migrants keep coming. Desperation means there is often no other choice.