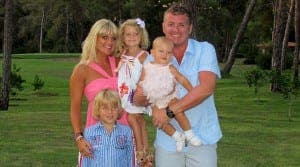 The Eastenders star has been viewing properties along the coast for the last two months, the Olive Press can reveal.

Originally interested in a beachside pad in Calahonda, Shane, 52, and his wife Christie Goddard are now viewing townhouses in their quest for a dream Spanish home.

No stranger to southern Spain, Shane – famous for playing Alfie Moon in Eastenders – appeared on hit TV show Benidorm for a one off cameo appearance last year.

It was while filming on the Costa Blanca that the singer-turned-actor fell in love with the country and decided to start house hunting.

“Shane and Christie are keeping their options open,” a source told the Olive Press. “They are pretty keen on the Calahonda area but are looking at villas, townhouses and beachside properties as well.”

Shane and Christie tied the knot in 2007 and the couple have three children aged between ten and five.

It is understood that their Costa del Sol pad will be used as a holiday home rather than a permanent residence.